Go to any festival, carnival, or state fair and you’re likely to find plenty of  deep fried goodness. Concession stands offer attendees nearly endless fried options. But often times, the choices can be quite overwhelming. This post will explore some popular fried offerings and help you decide what’s perfect for you. 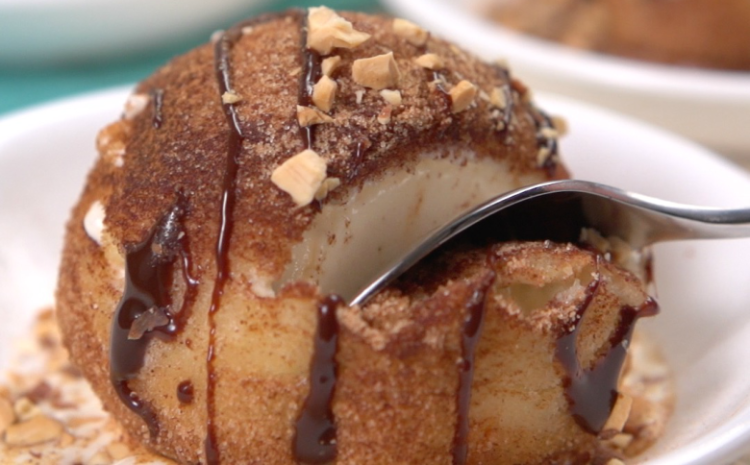 I know what you’re thinking… ice cream is supposed to be cold, right? Doesn’t matter. There are no rules when it comes to the deep fryer. Besides, it’s only the outer shell of your ice cream that will get fried. The inside remains cold and refreshing as ever. This makes fried ice cream perfect for hot, summer days. As a result, festival-goers who tend to run a little warm should accept no accept. For some extra flavor, ask for your ice cream to be dipped in cinnamon before frying. 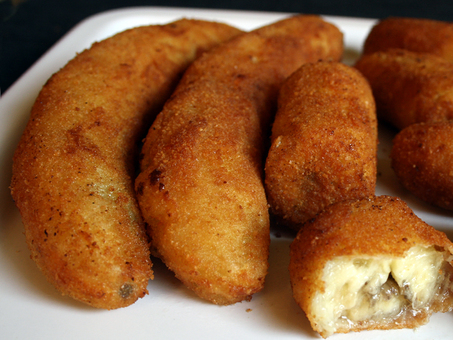 For when you’re in need of a quick snack. Deep fried bananas are delicious pick-me-ups that’ll give you energy and result in minimal crash. They are also known as  pisang goreng and found in several far-eastern countries. Places like Indonesia, Malaysia, Cambodia, Thailand, Singapore, Brunei, and the Philippines are well-known for offering this fried treat. Plantains are also commonly used instead of bananas. 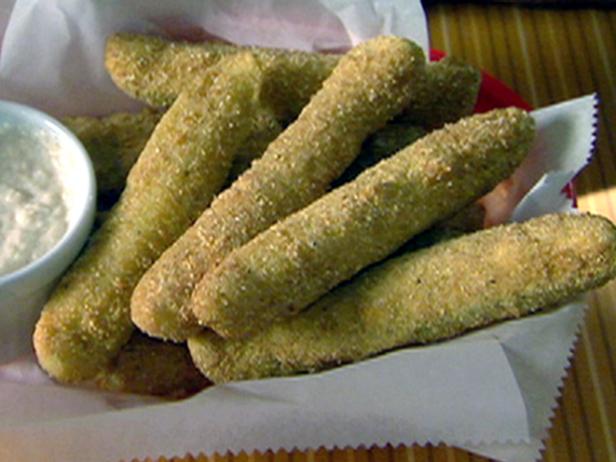 Pickles are a “love it or hate it” type of food. Some people can eat them until the jar’s empty, while others would rather starve than stomach a single pickle. With this in mind, deep fried pickles are even more divisive. Even some of the most passionate pickle eaters draw the line somewhere. And for many, that’s when their beloved pickled cucumber has been cooked in boiling hot oil. Deep fried pickles are best-suited for the most loyal of pickle devotees. 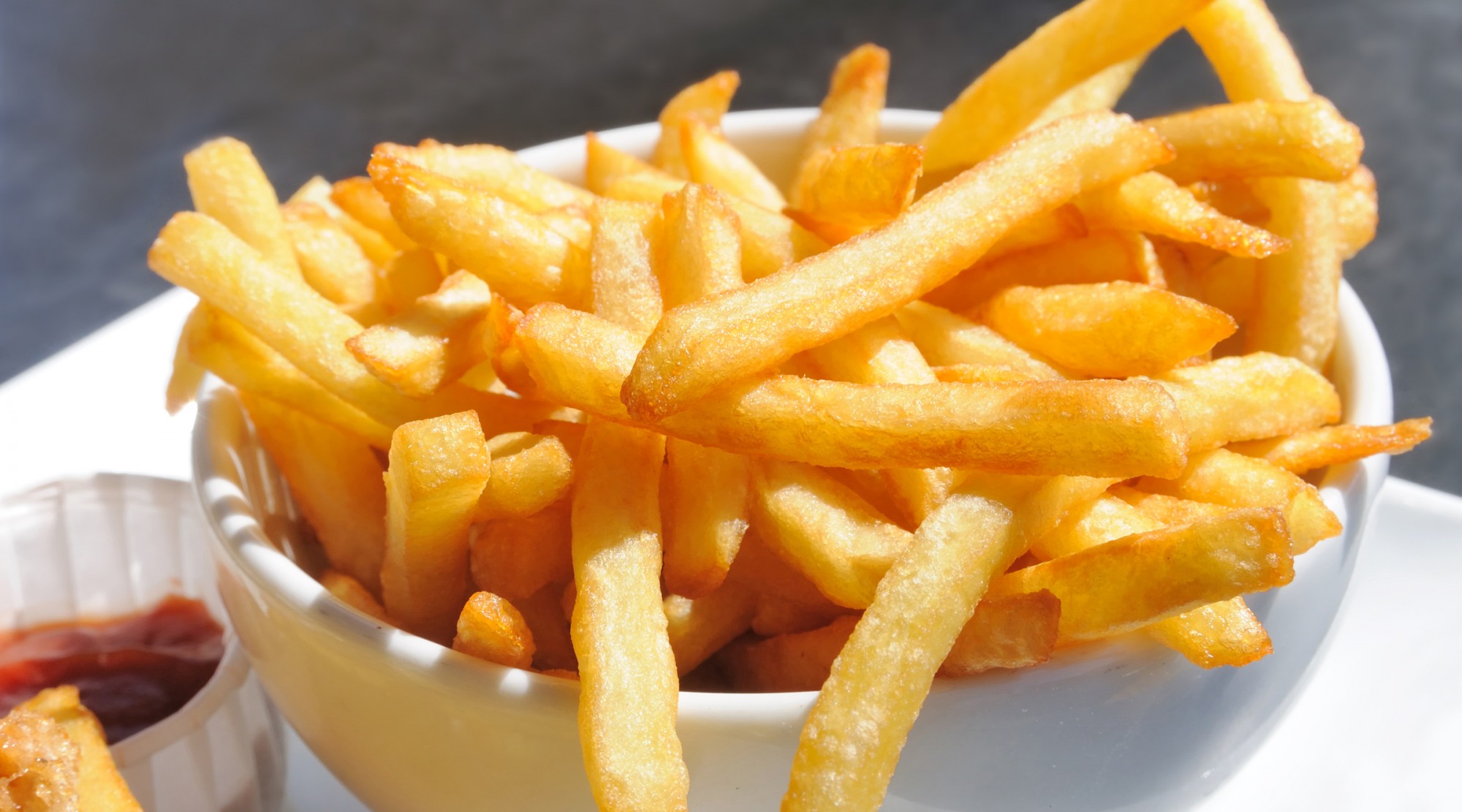 The classic fried option. On first glance, French fries might seem a bit bland. Most people have eaten more than enough to last a lifetime. Thankfully, fries come in more forms than ever. Steak fries, curly fries, crinkle-cut fries, waffle fries and shoe string fries are just a few options. Sweet potato fries are perfect if you’re looking for a different taste. Maybe you love the taste of classic French fries but crave a condiment other than ketchup. Try topping your fries with cheese, chili, or anything else in you’re in the mood for. All these variations make French fries perfect for variety seekers. Food connoisseurs have nearly endless options when it comes to French fries. 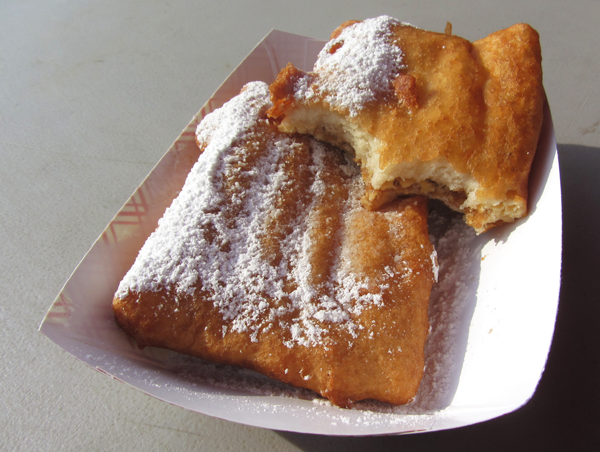 For breakfast lovers! Or at least breakfast lovers who are short on time. As if 30+ Poptart flavors weren’t enough, you can now try them all deep fried. Most people prefer Poptarts to be toasted or microwaved. But deep fried Poptarts have the same hot temperature along with an extra punch of flavor. These are dangerously addictive for sweet tooths. So be sure to exercise caution.

Deep-fried food for the cheese lover. Mozzarella sticks feature gooey mozzarella cheese on the inside and a crisp exterior on the outside. Served alongside a variety of sauces, deep fried mozzarella sticks can also serve as appetizers. The extra-hungry festival goer can get started on these before moving onto bigger game. 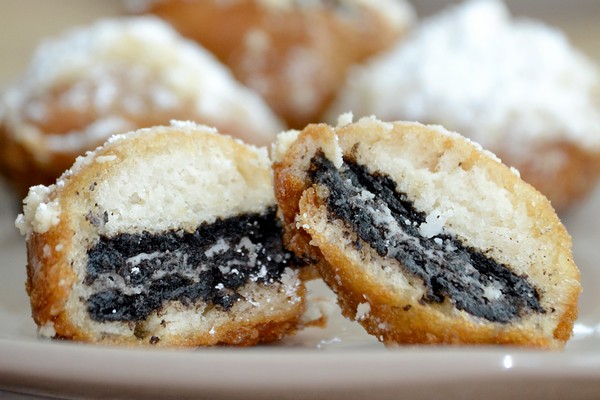 For the cookie monster in you. A deep fried Oreo is pretty much a cookie inside a cookie. The Oreo is dipped in batter, and then the whole thing is deep fried. The cream filling softens up and takes on a delicate consistency that makes it all the more sinful. It achieves a level of deliciousness that is likely a public safety hazard. If you thought the Oreo peaked with the Double Stuf, then you are sadly mistaken. 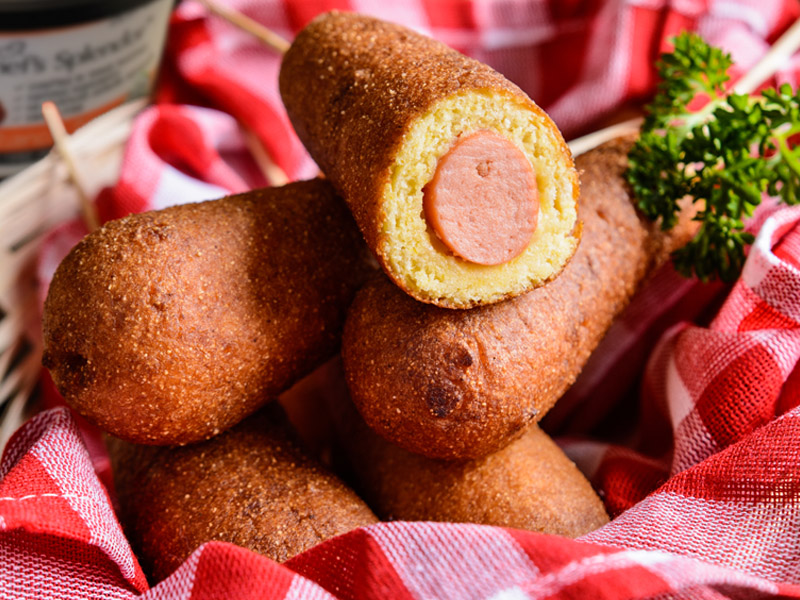 The classic State Fair treat. For the traditionalist who yearns for a simpler time. For a time before there were deep fried Poptarts. When a corn dog was all anyone could ask for all anyone could have wanted. It doesn’t matter where the future of deep fried food will take us. The corn dog is an American institution. And it will always remain one. 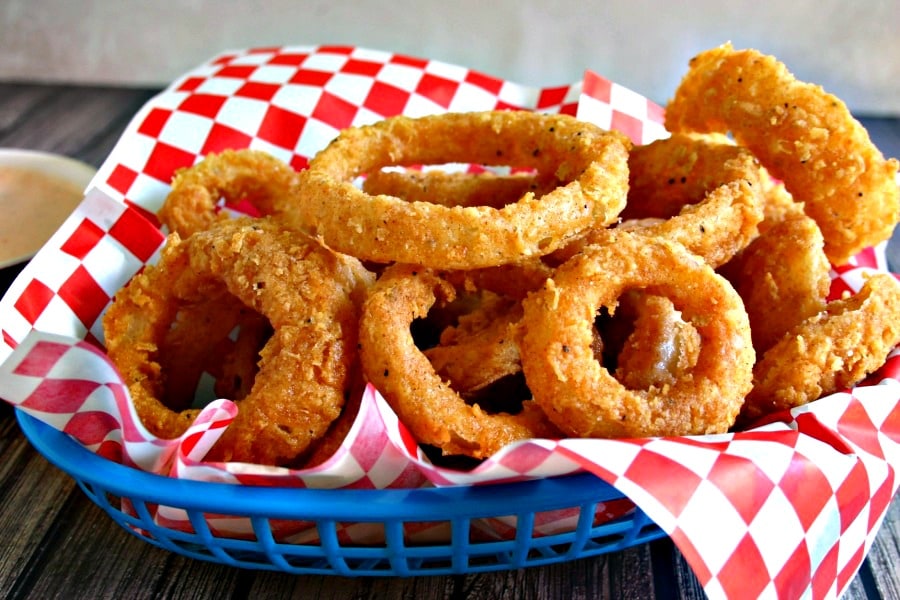 Deep fried onion rings are ideal for perfectionists who prefer their food to be completely symmetrical. They’re also great for someone who doesn’t want to feel completely guilty about eating deep fried goodness. Since they are made with real onions, you can truthfully say you’re getting your vegetables. The onion rings can also be used to make your own carnival game. Maybe you’re tired of paying full price for ring toss. Grab a plastic knife, stick it in some food, and try to land some onion rings around it. If playing with food is appropriate anywhere, it’s at the State Fair. 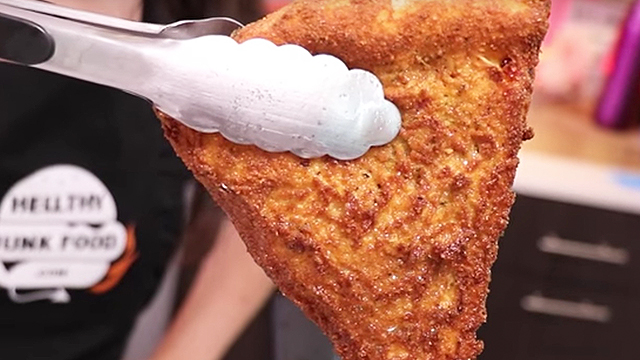 There are a few different ways to deep fry pizza. In Italy, pizza dough is deep fried rather than baked and toppings are added after. This is common among street vendors who don’t have access to pizza ovens. In Scotland, a pizza is cooked fully then submerged into a deep fryer to add extra flavoring. There is usually no batter involved in this process. And then there are those who dare to batter a pizza slice and then stick it in the deep fryer. Not for the faint of heart, this type of deep fried pizza is great for people who love to exercise and will have no issue working off the calories. 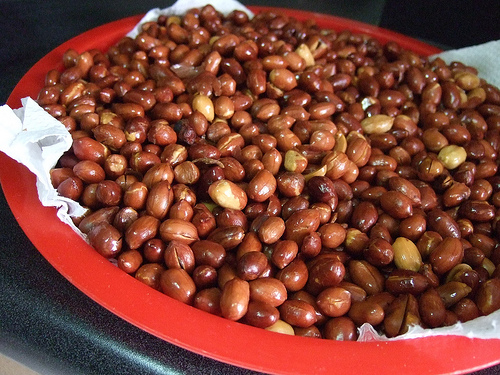 A long day out in the sun can take a lot of you. By the end of it, you’ll likely be tired. Maybe you'll want a tasty snack to help perk you up. Some peanuts perhaps. But the hard labor that goes into deshelling each peanut? No thank you. Luckily, deep fried peanuts can save the day. These peanuts are fried whole, shell and all. They come with differing flavors like salted, barbecue, Cajun, garlic, hot pepper, and even caramel. So if you want some peanuts but are thoroughly exhausted or maybe just kind of lazy, deep fried peanuts are the answer. 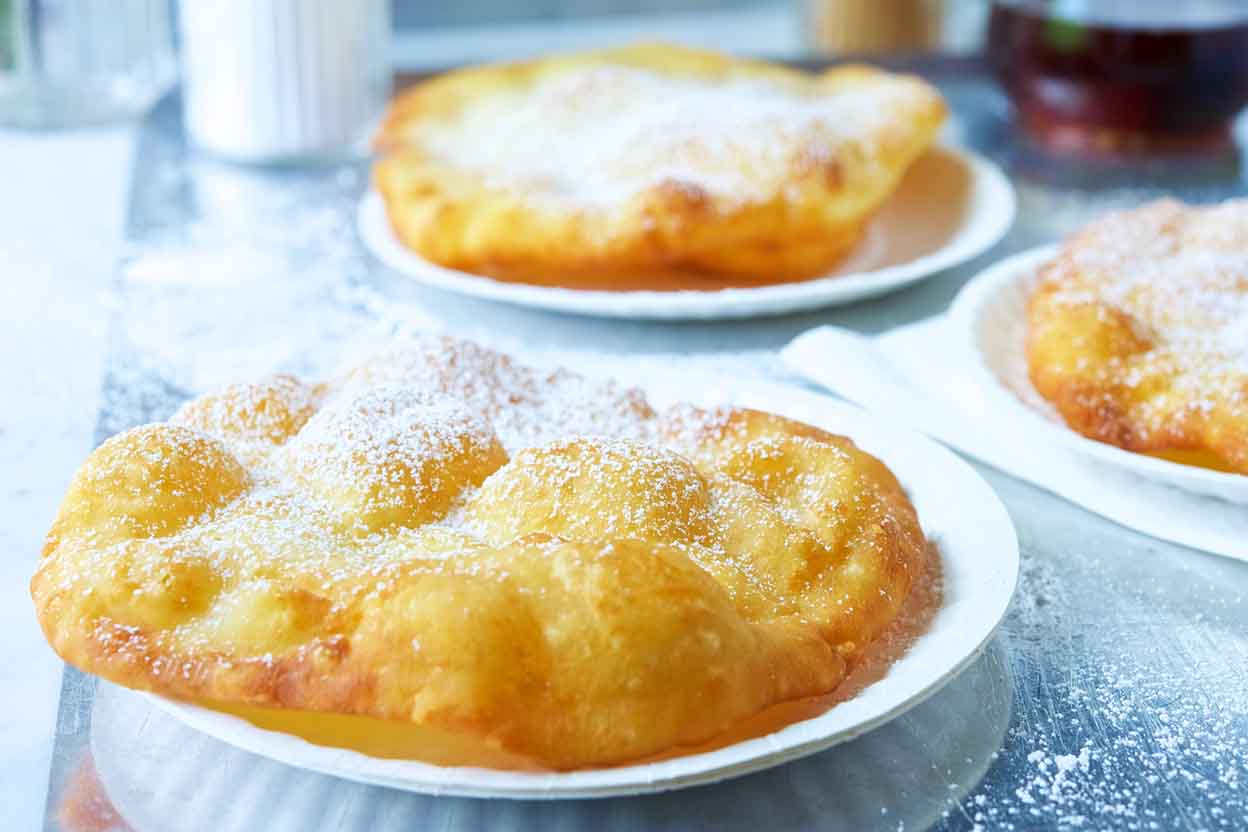 Deep fried dough sounds simple, doesn’t it? But it’s not. Fried dough can come in the form of zeppoles, funnel cakes, and even churros. Deep fried dough is of the one more classic options on this list. Perhaps best-suited for people who are planning to take a nice nap in the near future. The carb crash combined with the sugar crash will leave you begging for sleep. If you still have a long day at the fair in front of you, opt for something else. 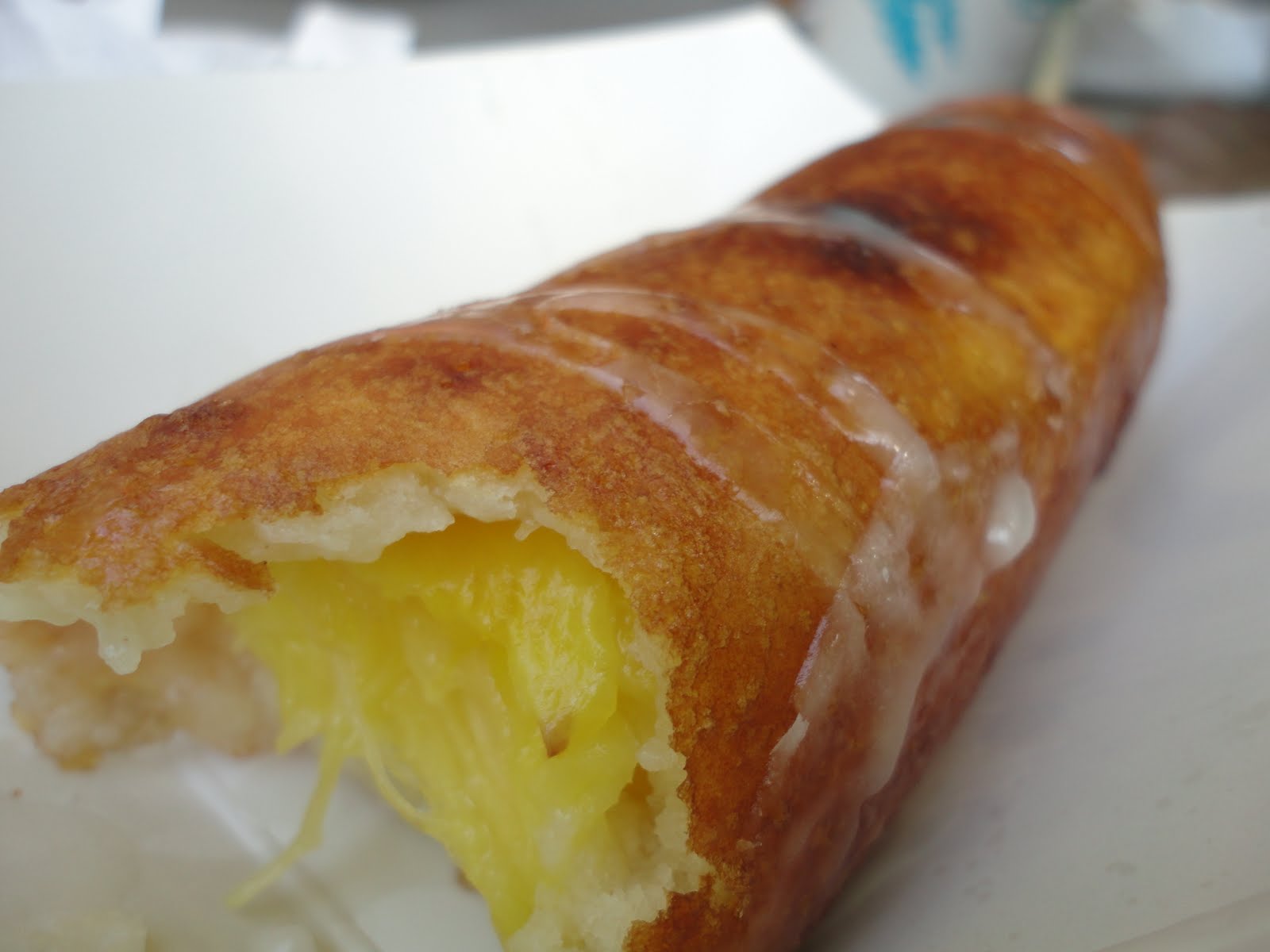 This is not a  joke. Deep fried butter actually exists. It was invented in 2009 at the Texas State Fair by the immortal Sergio Guerrero Ble. It rightfully won the prize of “most creative food.” And naturally, deep fried butter was put on a stick two years later at the 2011 Iowa State Fair. And thus marked the apex of human achievement. Making the culinary marvel known as deep fried butter is relatively simple. All it requires is some frozen butter along with either batter or breading. Coat the butter and deep fry it in oil. What you get is essentially very buttery bread that tastes similar to French toast but has way more calories. Deep fried butter is best left for those who have lower cholesterol. 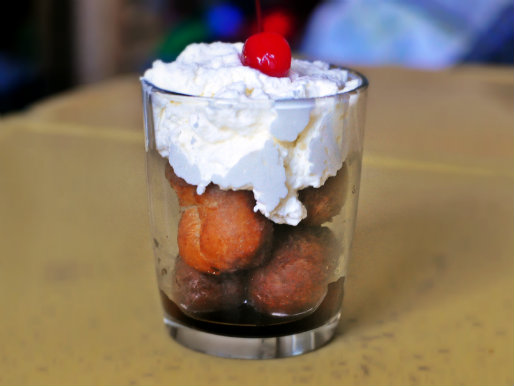 Deep fried coke comes from the same brilliant mind that gave us deep fried butter. So you know it’s a quality product. The culinary marvel was debuted in 2006 at the deep fry Mecca known as the Texas State Fair. Very different from regular Coca-Cola, deep fried coke is made with flavored batter balls that have been deep fried and topped with several tasty items. Coca-Cola syrup, whipped cream, cinnamon sugar, and a cherry are among the toppings. Deep fried coke has come a long since its introduction. The dessert is sold worldwide and has even been copied by deep fried Pepsi. 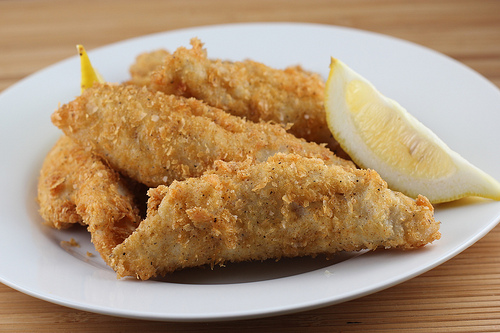 For the more “health-conscious” fried food eater. Deep fried fish offers great bang for your buck and can keep you full for hours. So if you plan on spending all day at a State Fair, one serving of deep fried fish might be all you need. Just don’t expect the health benefits of the fish to offset its fried coating. 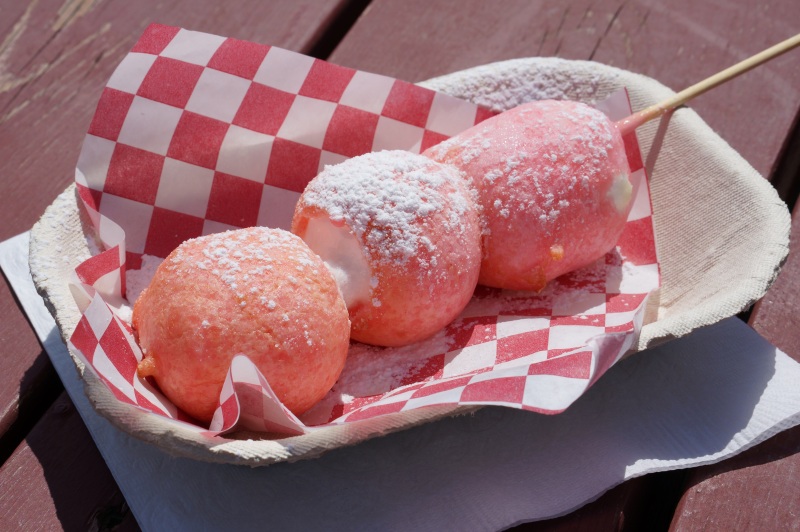 The truth is you can deep fry just about anything. All you need is food, a fryer, and an imagination. This list doesn’t even scratch the surface of what’s possible. There’s little doubt that the coming years will result in an even more delicious deep fried food discoveries. It’s up to you whether you want to be a deep frying pioneer or merely a beneficiary. There’s no shame in either.