Ramen noodles are among the most well-recognized and widely consumed Japanese cuisine worldwide. The main kinds of Japanese ramen, namely: shio (salty), shoyu (sweet soy), miso (soybean paste), tsukumen (cold noodles), and tonkotsu (pork bone soup). There are lots of different types of ramen available everywhere in Japan, but some regions have developed their own specialties. Here are some of the most popular and delicious regional styles of ramen from Japan

The Different Types of Ramen You Need to Try 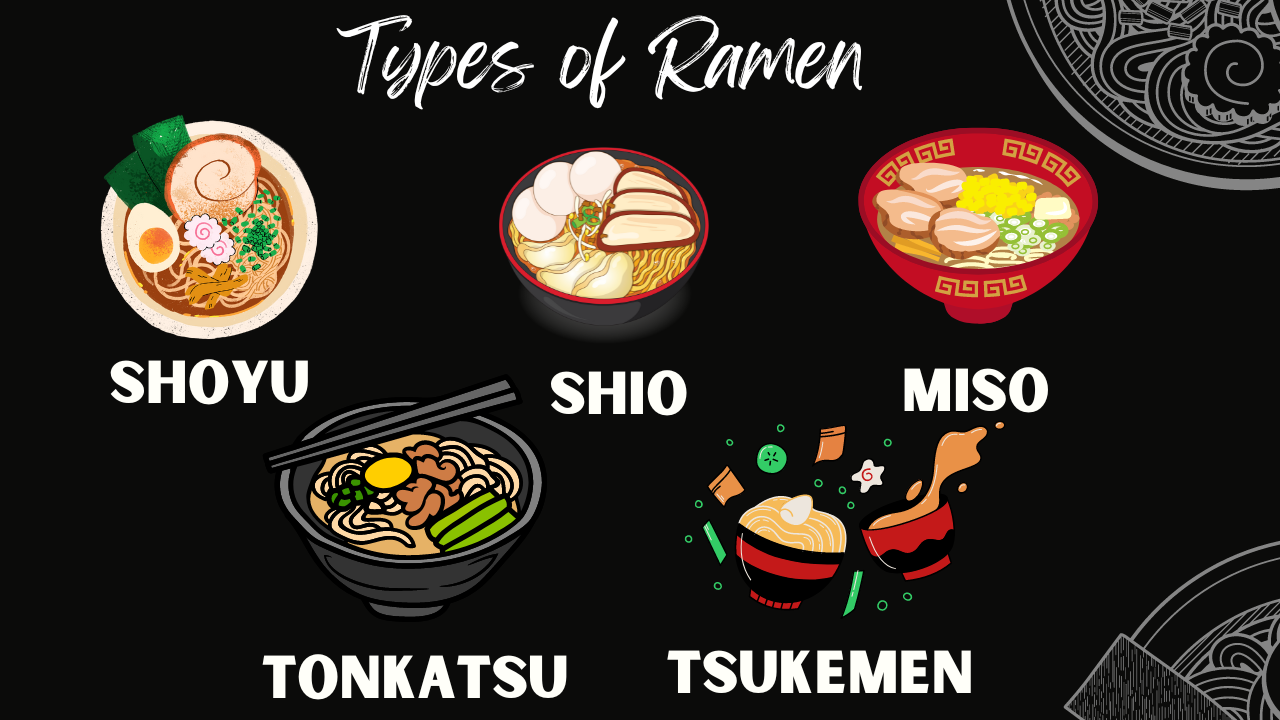 Varieties of Ramen According to Their Region 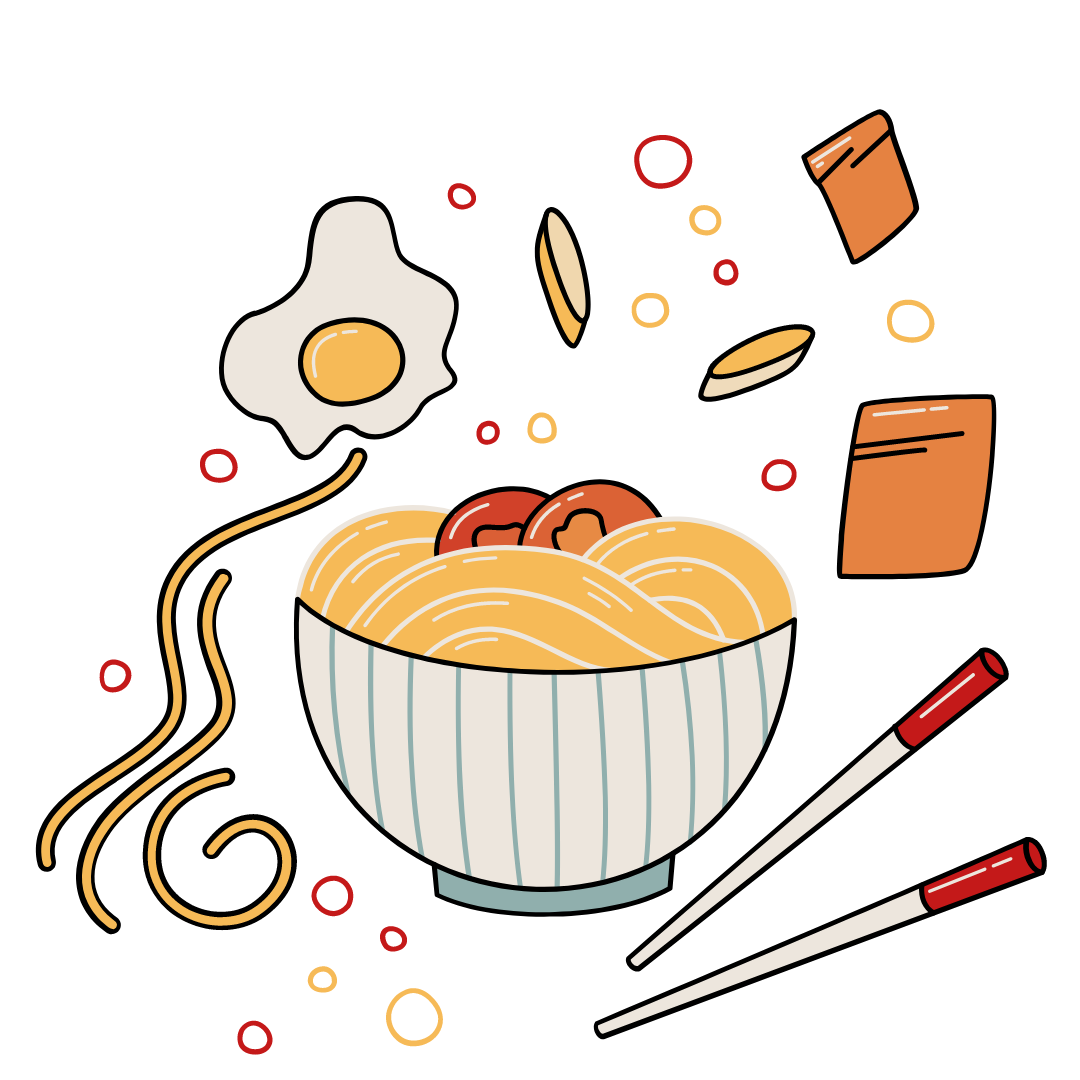 Love Japanese cuisine? You should check out the types of sushi you need to try! 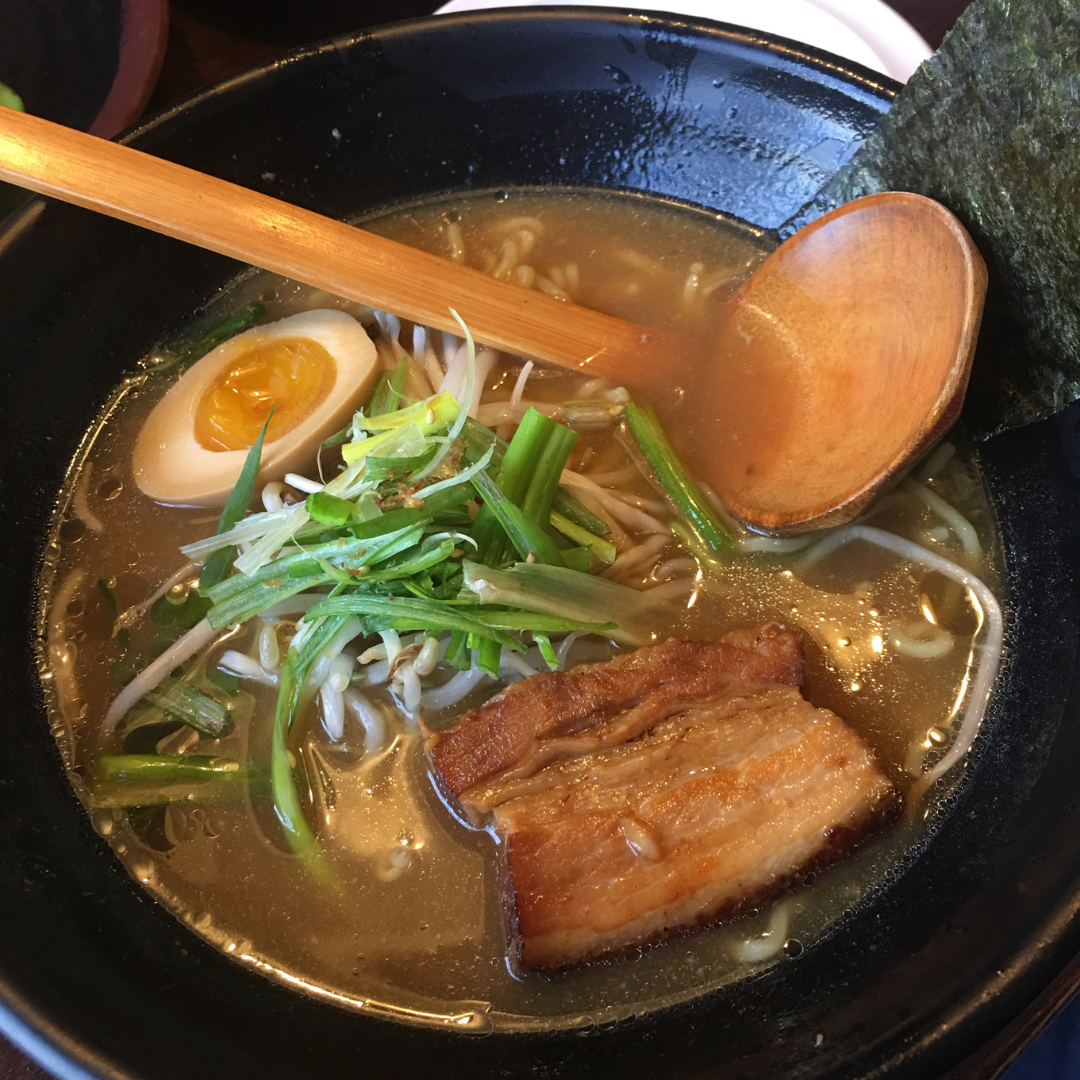 Soy sauce is the Japanese term for shoyu (soy sauce), and this light style of ramen has been seasoned with just that. Shoyu Ramen noodles were first created in Japan in 1910 by a man who opened a ramen shop called Rairaiken in the Asakusa district of Tokyo. Soy sauce is probably in most people's pantries, but when making ramen noodles, ramen chefs use a different type of soy sauce than what we're used to. They use a special recipe for making their base sauce, which includes ingredients like fish stock, mushroom powder, and herbs. Tare is usually added to a chicken stock base. 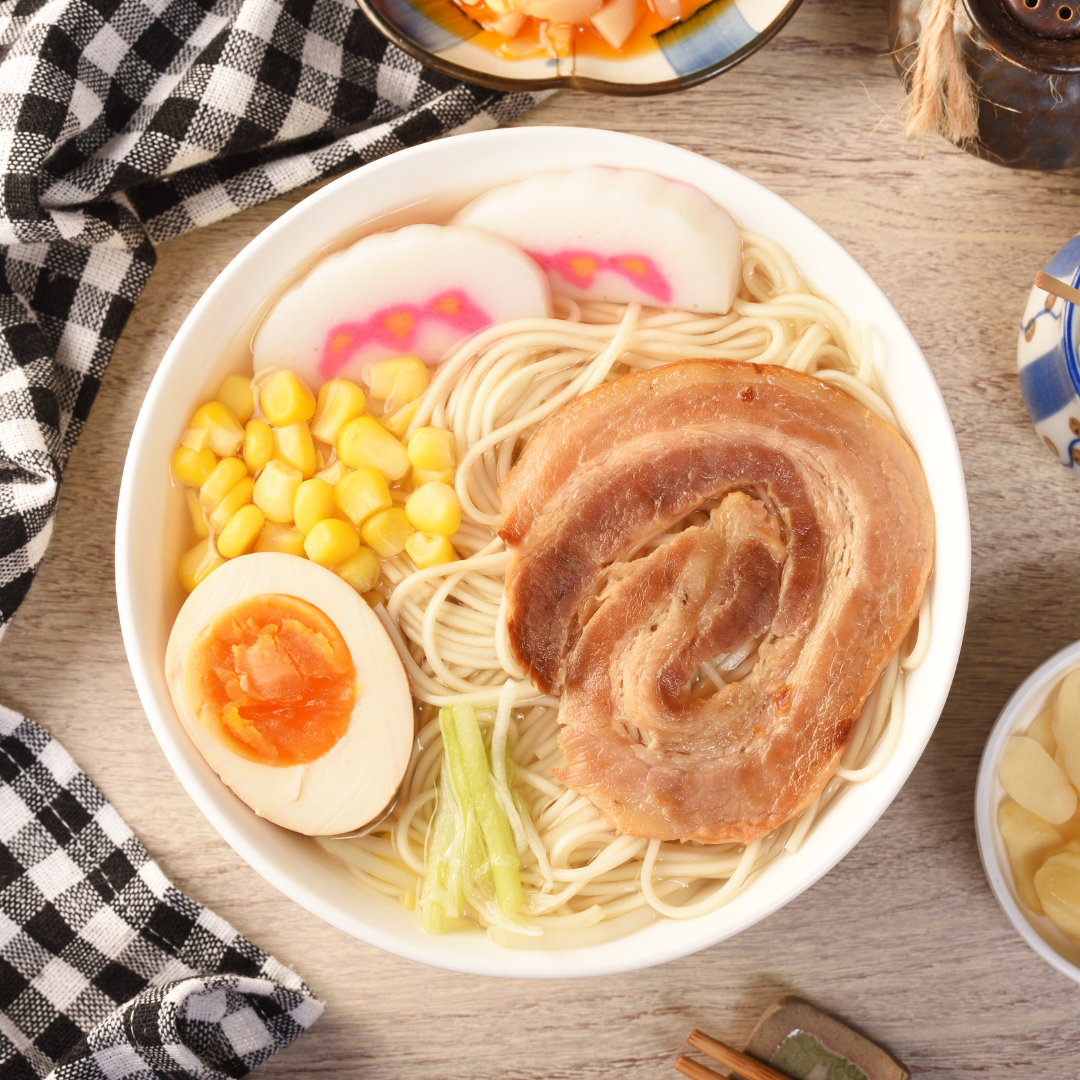 Shio (or Salt) Ramen is often prepared using a chicken stock base, but can also be prepared using a pork or seafood stock base. This light-bodied, low-fat ramen that has less sodium than the others is usually clear in color and is the saltiest among them. 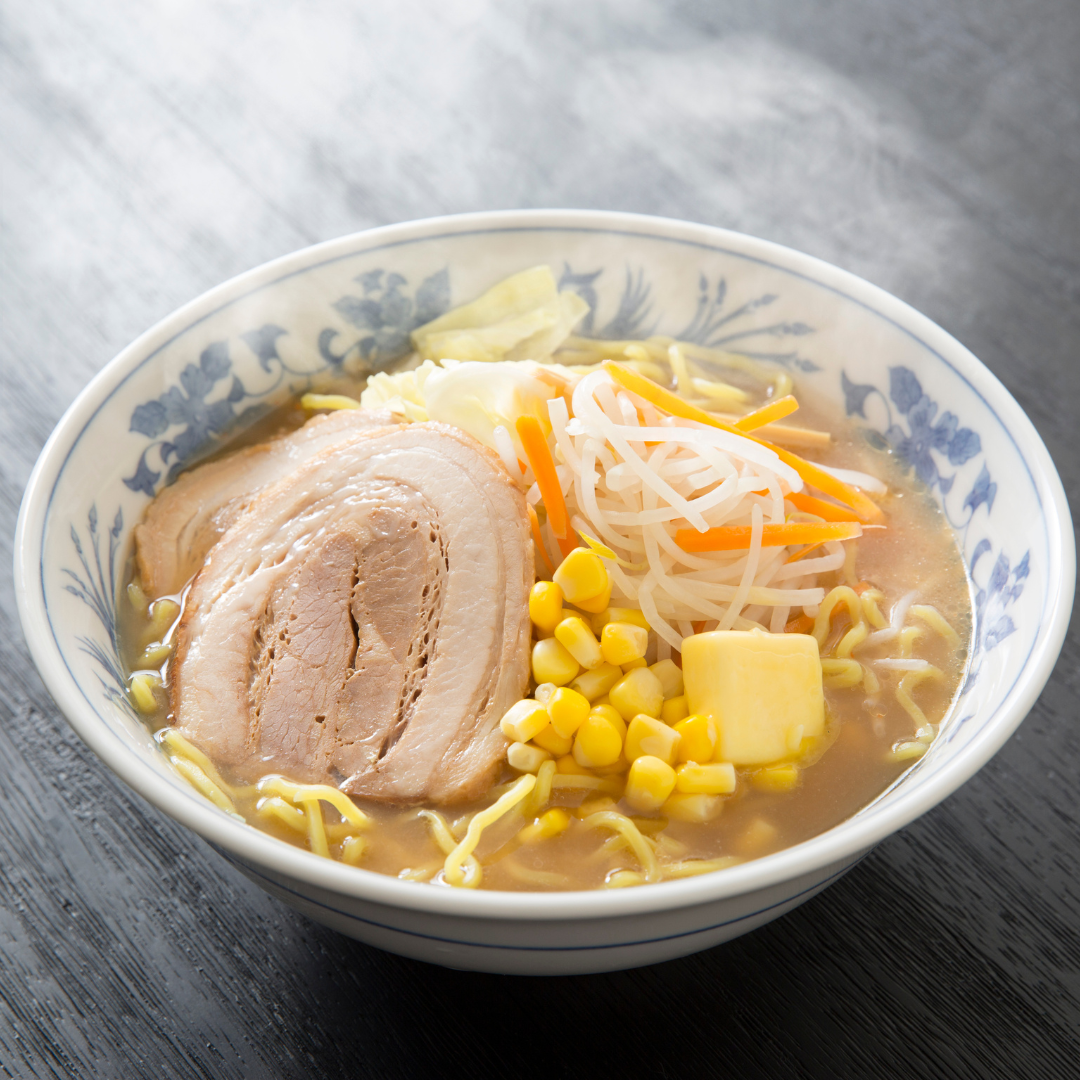 Miso ramen is a type of ramen consisting of noodles served in a broth flavored with miso, a thick, salty, reddish brown sauce made by fermenting cooked soya beans. This thick and richly flavored ramen originated in Japan’s Hokkaido prefectures, but it has now spread throughout the entire country. Miso ramen has common toppings such as green onions, bamboo shoots, nori seaweed strips, and more. It may also come with additional ingredients such as eggs, pork belly, chicken breast, beef brisket, and vegetables. 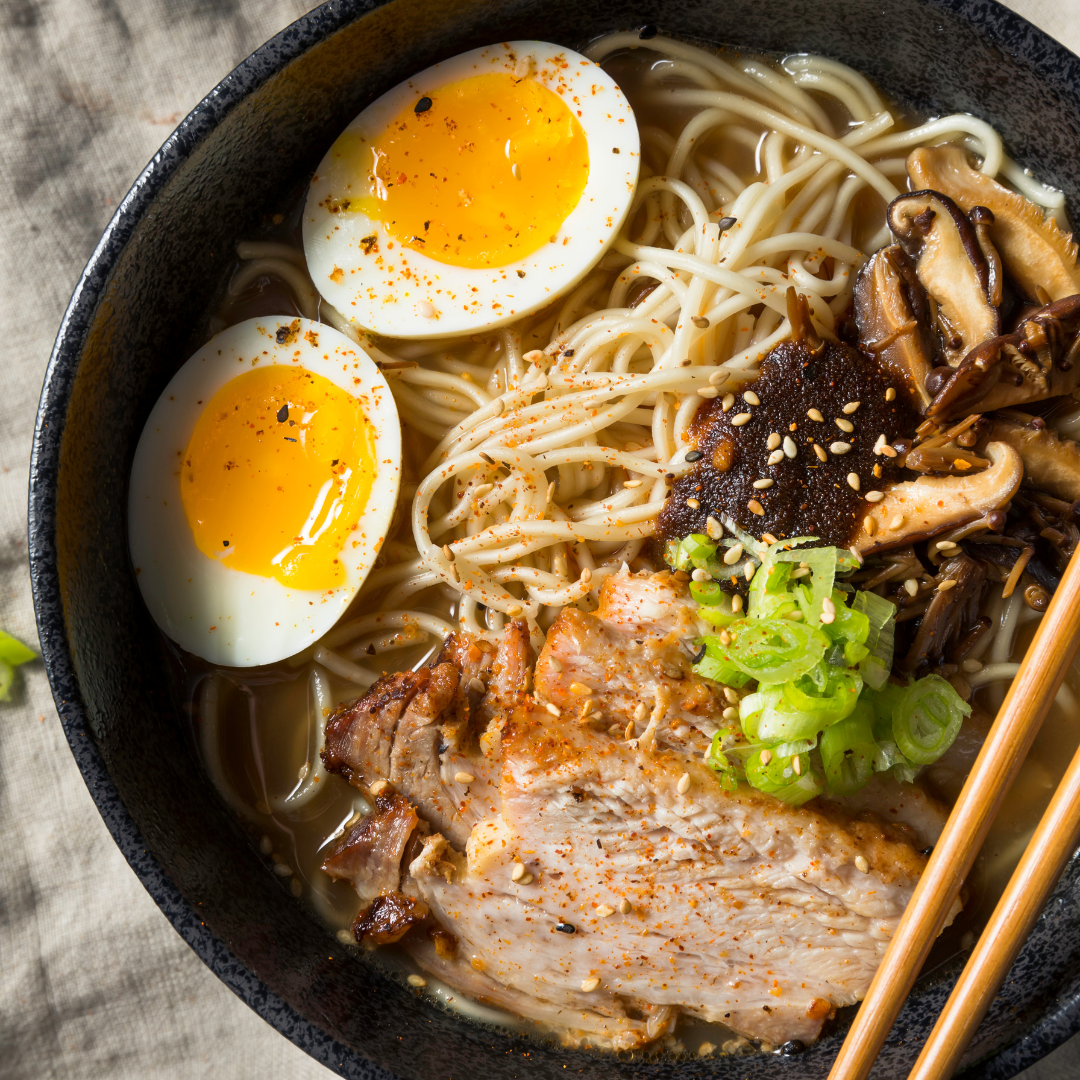 One of the most delicious, and rich ramen noodles out there is the tonkotsu. Hakata ramen is one of the most popular types of tonkotsu ramen. It was invented in Fukuoka. This super creamy white, extra rich tonkotsu is usually served with thin, hard ramen noodles and minimal toppings. The reason why they were able to invent Hakata ramen was that they didn't have any chairs, so serving quickly cooked thin noodles made sense for their business. There are other parts of Kyushu that serve thicker noodles and different types of broths. 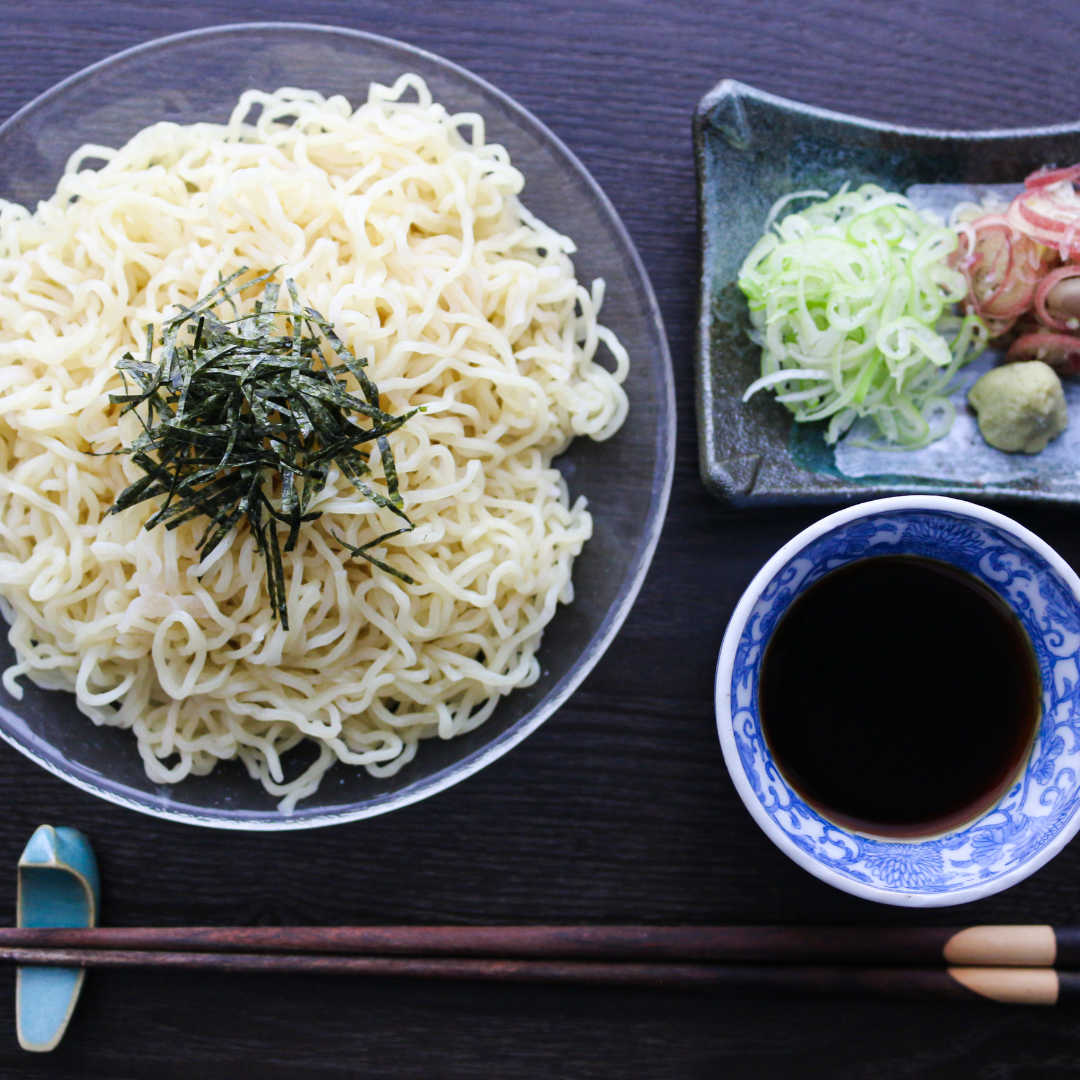 Tsukumen noodles are thick and hearty ramen noodles. They are typically cooked, then plunged into the cool water, and then served alongside a bowl of tare ramen broth. You dip the noodles into the soup and let the thick broth soak them up. There are lots of different types of tsukemen soups – from seafood-flavored ones to salty pork broths.

Ramen broth is typically classified by heaviness, broth base, and seasoning. 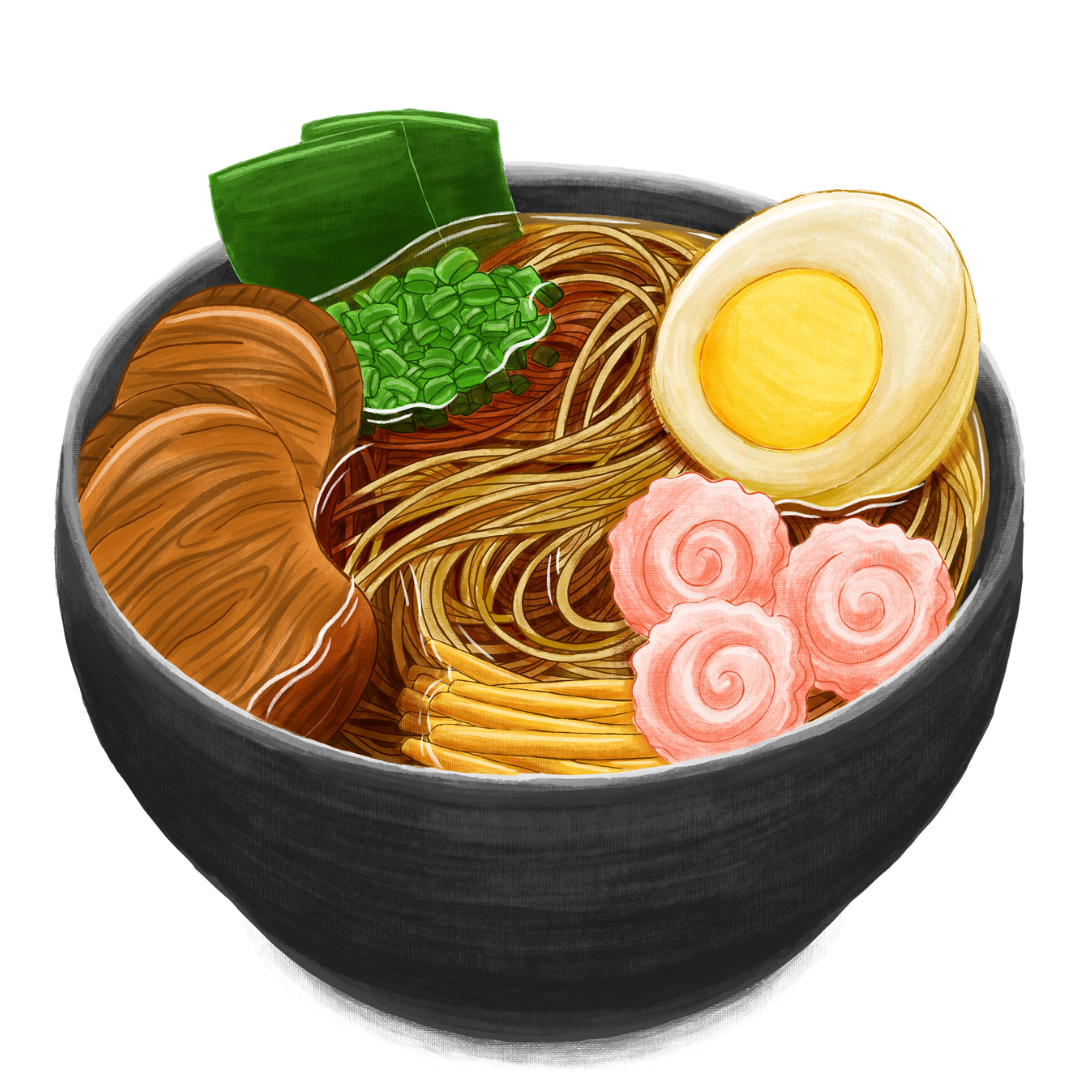 Kotteri (Rich): This broth is made by boiling meat for hours until it becomes gelatinous and rich in nutrients. These opaque white bone broths are also known as paitan.

Assari (Light): Assari broth is clear and thin, often flavored with more vegetables, seafood, or bones simmered for a short time at a low heat so as not to cloud it.

The broth base is one of the main ingredients used to create the soup. It can range from animal bone broth —such as beef, chicken, or fish — to even lighter broths made using seaweed or dried foods. They include a wide range of ingredients, including onion, garlic, ginger, scallion, mushroom, etc. 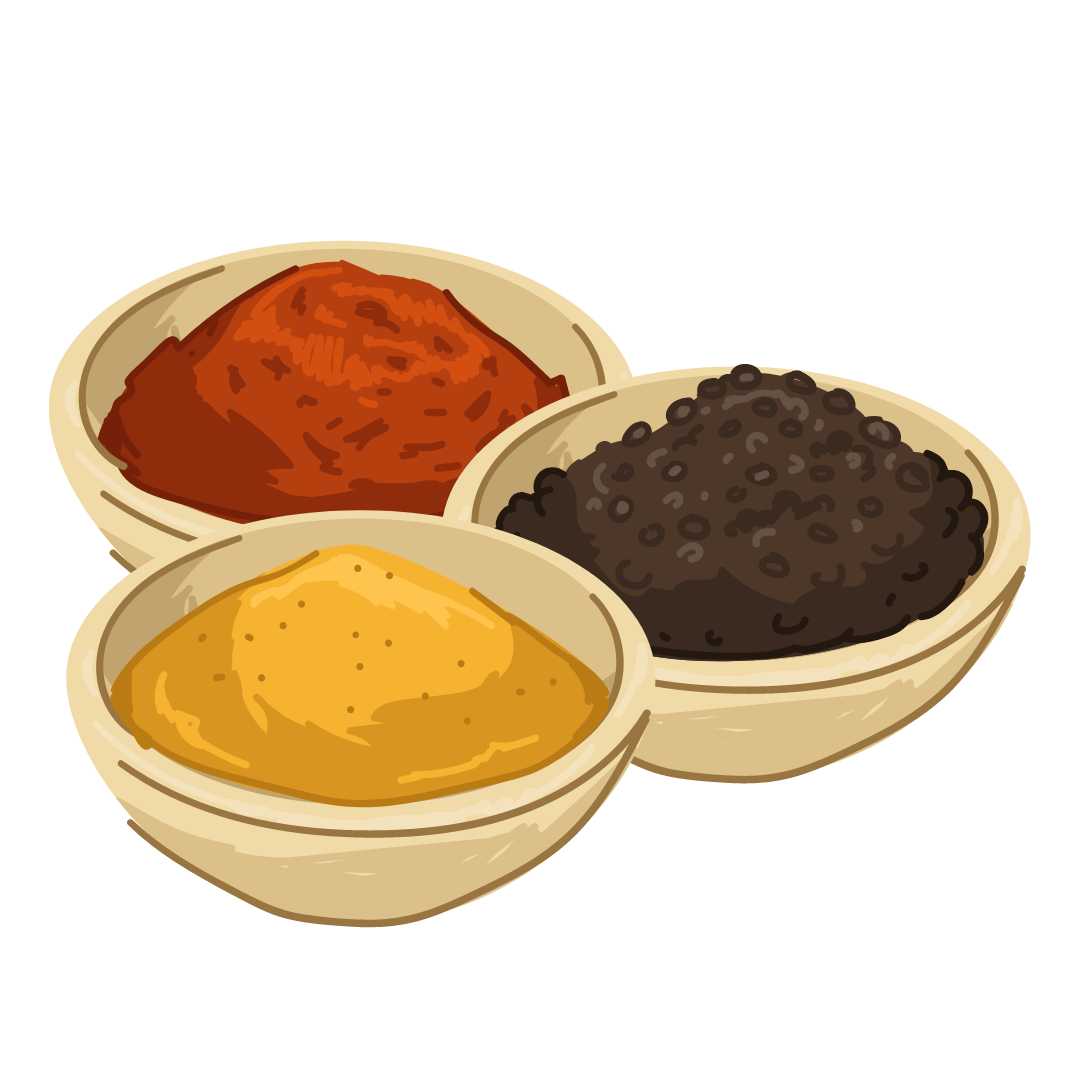 There are different types of seasoning used to add taste to the soup. You can add it directly to the broth, but most ramen restaurants add it to each individual serving, so the menu becomes a bit more customizable. The most common seasoning ingredients are:

Want to try this out? Check out this recipe manual to make a bowl of ramen at home! 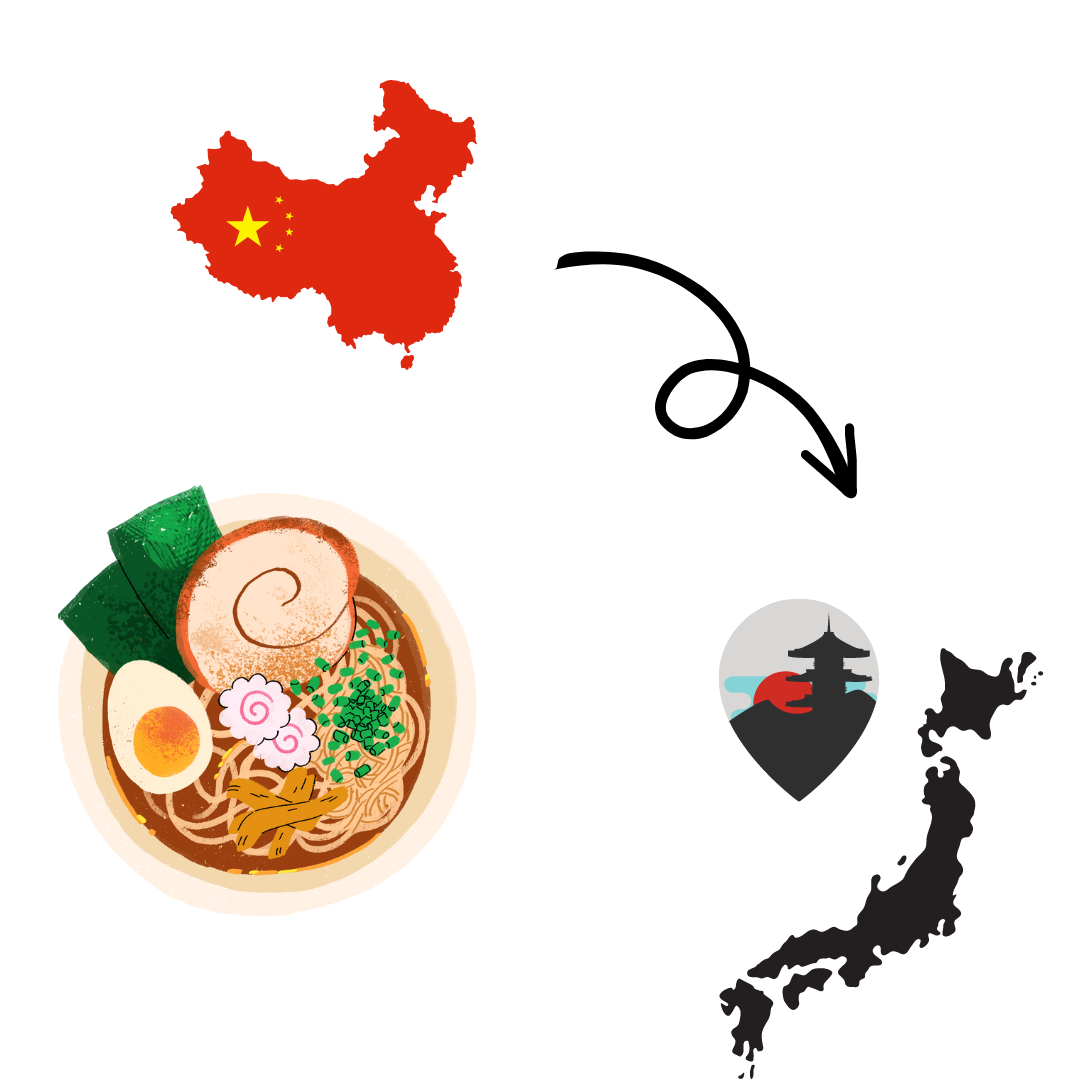 More than 32,000 ramen shops exist in Japan, most of which are crowded with people waiting for their turn. Ramen was originally invented in China, where it was called "Lamian." It later became known as "Ramen" when Japan adapted it into their own language.

According to the Yokahoma Ramen Museum, ramen journeyed from China to Japan in the year 1859, and since that time the soup has become a dish worthy of Michelin stars. Ramen shops in Japan are often small, cramped, and located in unexpected places. At restaurants, diners often sit shoulder-to-shoulder, slurping their noodles and watching as the master cooks them at lightning speed while, as if choreographing, ladles hot broth into their bowls.

There are four main types of ramen (as outlined below) but there are countless others. It's important to know that ramens are extremely regional in Japan. Each prefectural government prepares its own version of ramen noodles, which may vary from region to region. There's really an endless variety of ramen noodles, but we've compiled a general guide to the most popular types.

About to Open a Ramen Stall/ Restaurant?

If you plan to serve this healthy, convenient, and popular dish, you might want to consider investing in good restaurant types of equipment. Here at Culinary Depot, we help you decide which equipment or dishware is suitable. Get in touch with us today!