Dining out at a restaurant with friends and family is one of life’s greatest pleasures. Everyone has his or her favorite spot—whether that’s a cheap hole in the wall or an elegant but pricy restaurant. But some people crave—above all else—new experiences at interesting establishments. The following is a list of just some of the most unique restaurants in the United States. 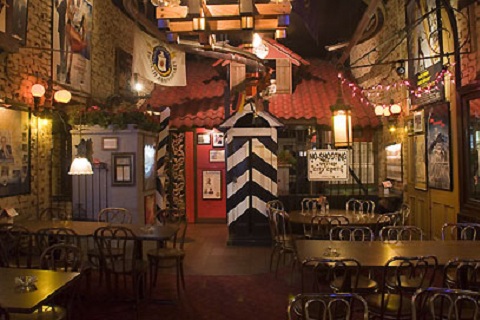 This secret agent-themed restaurant provides an interactive dining experience that’s not found anywhere else. Requiring diners to say a top secret password to gain entrance, the SafeHouse also allows customers to earn their way into the restaurant by doing something silly. Patrons at the bar watch a TV that displays customers attempting to gain clearance by dancing, hoola hooping, or clucking like a chicken—all in the name of fun.

Once inside, diners get to experience moving walls, rotating tables, spy-themed memorabilia, and a cell door from a KGB prison. Martinis at the SafeHouse are shaken—not stirred—by being sent through a 600 ft. nomadic tube that travels around the bar. Secret passages, entrances, and exits fill the restaurant, always keeping patrons on their toes. While the SafeHouse’s menu only consisted of bar food when the establishment first opened, the restaurant has evolved to offer delicious fresh Atlantic salmon and ethnic foods like Bangkok Chicken Satay.

The SafeHouse in Milwaukee has been a pillar of the community since 1966. However, David Baldwin—the restaurant’s founder—retired in 2015 and sold the restaurant. Consequently, a SafeHouse opened in downtown Chicago earlier this year. By all accounts, the Chicago restaurant is just as impressive as the original in Milwaukee. 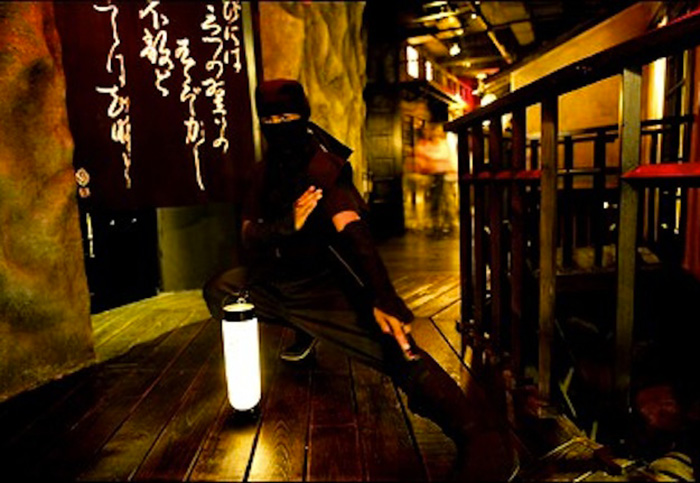 Serving traditional Japanese dishes and sushi, Ninja New York provides diners with a distinct setting that transports them to a different time and place. The restaurant’s interior is meticulously designed to reflect a ninja village of feudal days, giving the restaurant a one-of-a-kind ambiance. Featuring stone walls, mysterious mazes, clever contraptions and magicians, this underground eatery requires its servers to dress as ninjas. Make sure to keep an eye out for them, as the ninja servers are notorious for sneaking up on diners. 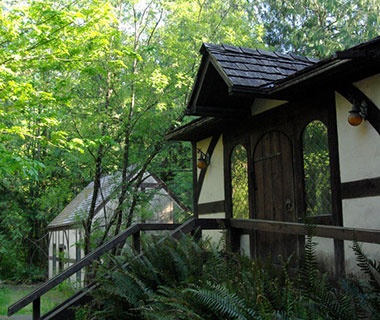 Located in Camlann Medieval Village, which recreates rural life in 14th century England, the Bors Hede Inne gives diners the opportunity to eat a meal that would have been served hundreds of years ago. The restaurant uses recipes directly from medieval cookbooks, offering rust stones, salad, fenberry pie, salmon, roast pork, and chicken. Servers always dress, speak, and act in the character of a medieval inn-keeper. While cell phones and forks are strictly forbidden, spoons and knives are available for use. A mistrel intermittently serenades diners during meals with traditional music. Eating at the Bors Hede Inne is a sure-fire way to have a distinctly unique dining experience. 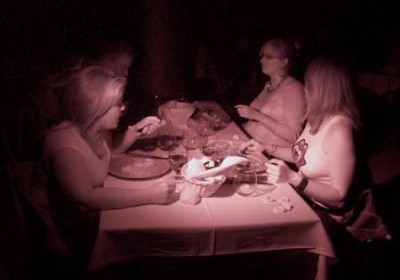 Opaque offers a pitch-dark setting combined with delicious food. The idea is that since a patron can’t see, his sense of taste will heightened—allowing him to better appreciate the restaurant’s food. Servers at Opaque are all blind or sight impaired, making them uniquely qualified to help patrons navigate this “Dining in the Dark” experience.

After starting as a west coast phenomenon, Opaque soon moved to Dallas and New York City. But even before it hit the west coast, dining in the dark was popular in European cities like Berlin, Paris, and Vienna. Not only does the dark setting enhance the flavor of food, but it also minimizes distractions and allows for great conversation between diners. 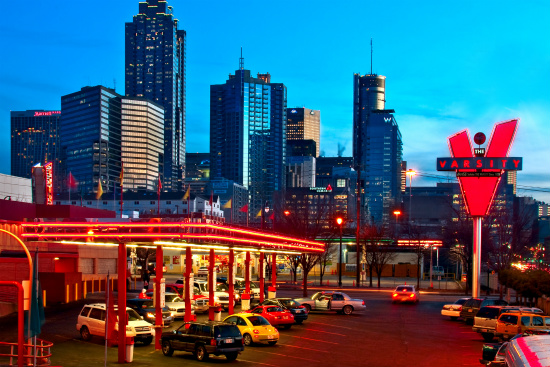 Ubiquitous throughout Atlanta, The Varsity is a 7-restaurant chain whose main branch is the largest fast food drive-in restaurant in the world. Spanning five blocks, this juggernaut of a fast food joint can seat over 800 customers inside and has space for about 600 cars. It serves all-American meals like hot dogs, burgers, sandwiches, and chicken. The Varsity initially targeted college campuses but soon evolved into something much bigger. Attracting U.S. presidents like Jimmy Carter, George H.W. Bush, Bill Clinton, and Barack Obama while they were in office, the fast food chain is known for its unofficial slogan of “What’ll ya have?” 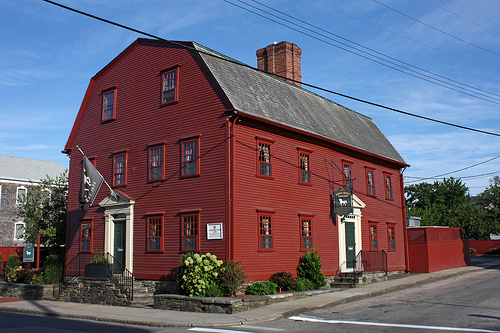 The oldest bar in America, the White Horse Tavern was built in 1652 and founded in 1673. With a rich history that includes sheltering pirates, this tavern briefly became a boardinghouse before falling into disarray and being restored as a bar/restaurant the 1950s. Today, the two-story watering hole serves delicious food on both floors. Its bar is still going strong, offering drinks like the Darn and Stormy—which combines Gosling’s Dark Rum and ginger beer. The White Horse Tavern deserves to be on the bucket list of every serious bar enthusiast. 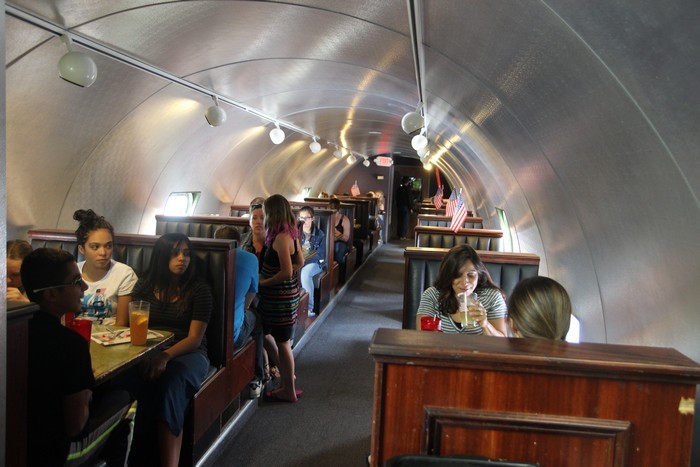 This aviation-themed restaurant is the perfect dining establishment for airplane lovers. With room for 42 diners inside a Boeing KC-97 that was built in 1953, The Airplane Restaurant is also somewhat of an aviation museum. Hundreds of pictures, artifacts, and memorabilia are scattered throughout the restaurant. If you have time, make sure to stop by the cockpit for an impressive look at where the pilots used to operate the aircraft. 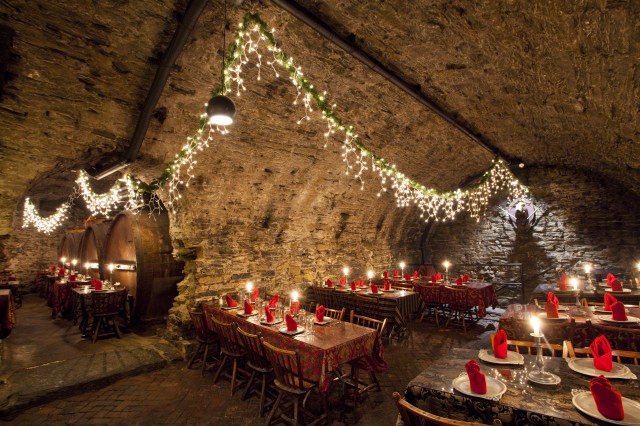 This unique restaurant is located in a stone-lined vault that’s 43 feet below street level. Part of the historic Bube’s Brewery, the Catacombs offers an upscale dining experience along with a large selection of cocktails and wines. A rotating selection of house-brewed and draft beer is also available. Before sitting down to eat, you’ll be given a brief educational tour of the brewery. With both traditional and gourmet dishes on the menu, the Catacombs has something for everyone.

These are just a few of the most unique restaurants in the United States. If you’re looking for a truly distinct experience, you can’t go wrong with any of these options. There are surely hundreds of more unique restaurants around the country that aren’t listed here, so make explore other options as well.